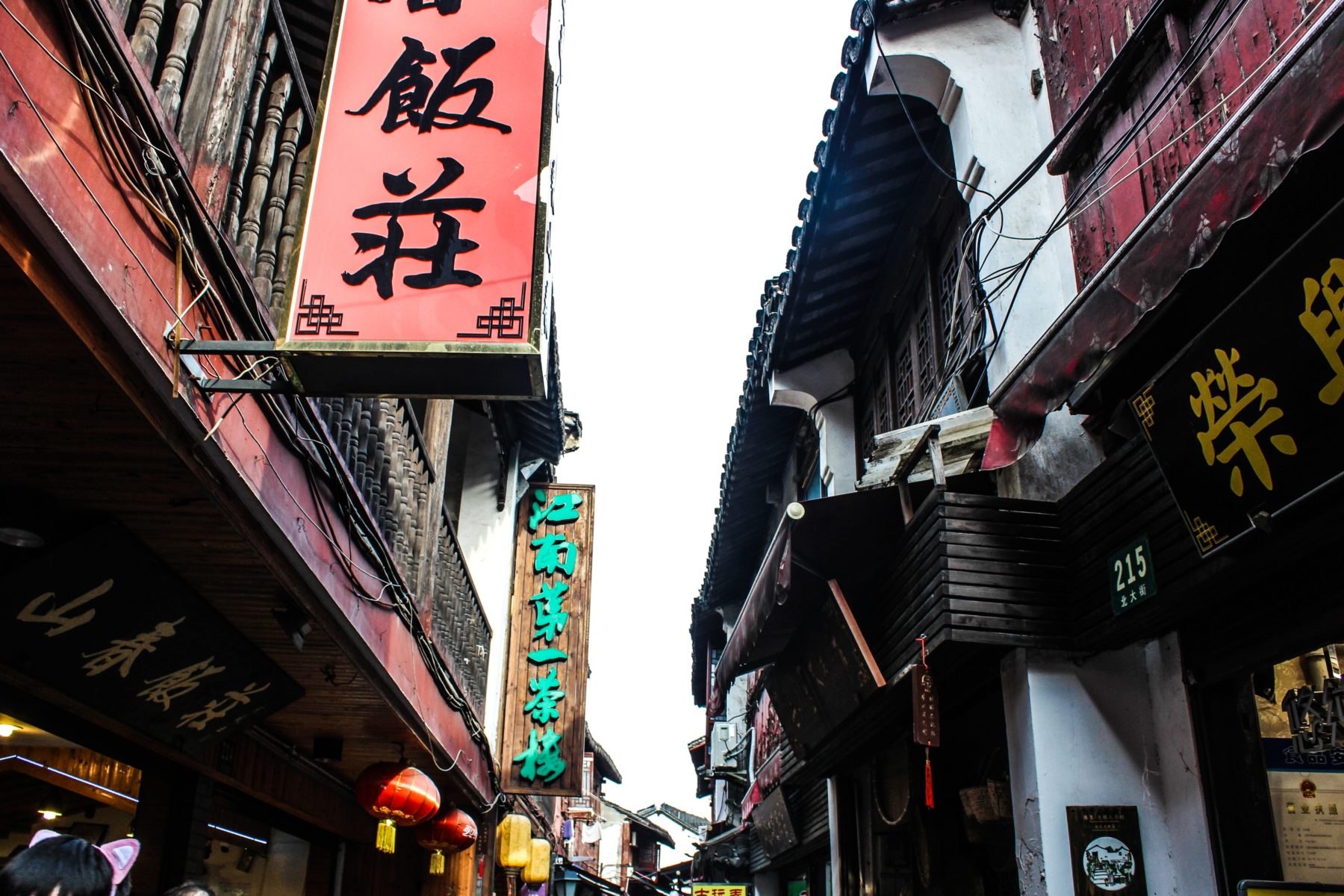 PayPal has become the first foreign company to obtain a payments license in China, which could be a sign of things to come for Visa, Mastercard, and other international payment powerhouses who have been trying to break into the Chinese market for years now. The Chinese government appears to be signaling a further loosening of financial market restrictions for no-domestic firms. If this continues, China could offer even more lucrative benefits for companies than what has been seen in India over the last couple of years.

PayPal has become the first foreign company to acquire a payments license in China, after purchasing a 70% stake in Chinese payments group GoPay, approved by the country’s central bank. Although American Express has been providing foreign payment services in China since last year, it was only allowed through a 50-50 partnership with a domestic company. The Chinese market is a crucial one for US payments firms as, according to eMarketer, 76% of Chinese smartphone users made a mobile point-of-sale purchase in 2017, compared with 25% of American users. In total, 61.8% of all such transactions globally are Chinese.

Paypal’s expansion is a big step in the broader opening of Chinese financial markets for foreign investors as the country sees it “necessary to further expand the high-level two-way opening of the financial industry, encourage overseas financial institutions and funds to enter the domestic financial market”, according to the Financial Stability and Development Committee of the State Council. Comprehensive reforms to open markets further are likely to be hastened going forward following recent reports that Trump administration officials are considering ways to limit U.S. investors’ portfolio flows into China.

Asia is currently the world’s most lucrative battleground for digital payments. Back in 2017, MRP highlighted PayPal’s expansion into India, another market experiencing exponential growth in payments and other electronic financial services. Revenue from PayPal’s business in the country grew twelvefold during the 2018 fiscal year to reach $37 million, up from just $3 million during the previous year. That is only a small sliver of the payments industry in India as an Assocham-PWC India study recent predicted digital payments in India will more than double to $135.2 billion in 2023 from $64.8 billion this year, and Credit Suisse projects the overall Indian payments market to be worth $1 trillion over the same period. Google launched its Google Pay app in the country in 2017, built on top of Indian government-backed UPI payments infrastructure, and boasts 67 million monthly active Indian users worth $110 billion in revenues in the last year.

China’s payments ecosystem is already much larger than India’s, but is expected to see huge growth in coming years nonetheless. And now, Western companies like PayPal, Visa, Mastercard, and others will be joining the mad rush to break off a piece. The latter two firms are among the many foreign companies that have been kept waiting for license approvals for years now. but hopefully the latest Chinese efforts to globalize their markets should finally expedite the process.

The Financial Time notes that third-party online payments in 2018 grew 45% in value to $29 trillion from the year before. On the mobile payments side, the market is expected to grow 21.8%, from 2017 to $96.73 trillion in 2023, driven partly by increasing demand for e-commerce, a report from Frost & Sullivan found. The market has also seen an increase in cross-border transactions, particularly in sectors like e-commerce, travel and overseas education. These reached $6.66 trillion in 2016. The report additionally said the total number of active mobile payment customers is expected to reach 956 million by 2023, up from 562 million in 2017.

While those numbers are impressive, it won’t necessarily be so simple for foreign firms to break power Chinese firms already hold over the space.

Alipay and WeChat are expected to earn 40% of all payment fees within China per year by 2020. Additionally, the typical domestic payments fee rate of 0.5 per cent, which is lower than the international average of 1.5 to 2 per cent. As of June 2019, Alipay counted over 900 million annual active users in China. Better yet, they’re extremely active; 80% used at least three different kinds of service offered by Ant Financial, a financial affiliate of Alibaba Group, from the wealth management to the insurance and credit/microfinancing services. More than 8 million brick-and-mortar stores in China accept AliPay.

Digital currencies could also speed the development of payments in China as the country’s government seeks to be the first to issue such an asset. In mid-September, MRP outlined the People’s Bank of China’s (PBOC) development of a digital, “stablecoin” version of the Yuan. While Mu Changchun, previously deputy director of the People’s Bank of China’s payments department (and now head of the PBOC’s digital-currency research institute), announced that an official Chinese digital currency was “almost ready” in August, and some believed it would go live as soon as Nov. 11, coinciding with Singles’ Day, a popular Chinese shopping holiday. The PBOC denied having set any date for an imminent release of the digital Yuan, but the country is likely racing to beat Facebook’s Libra to the punch.

While it will take some time for non-Chinese payment firms to make their mark in China, the strong results we can already observe in new services and investments in India is evidence that companies like PayPal, Visa, Mastercard, Google, and others will eventually begin breaking off larger pieces of market share and bolstering their earnings. 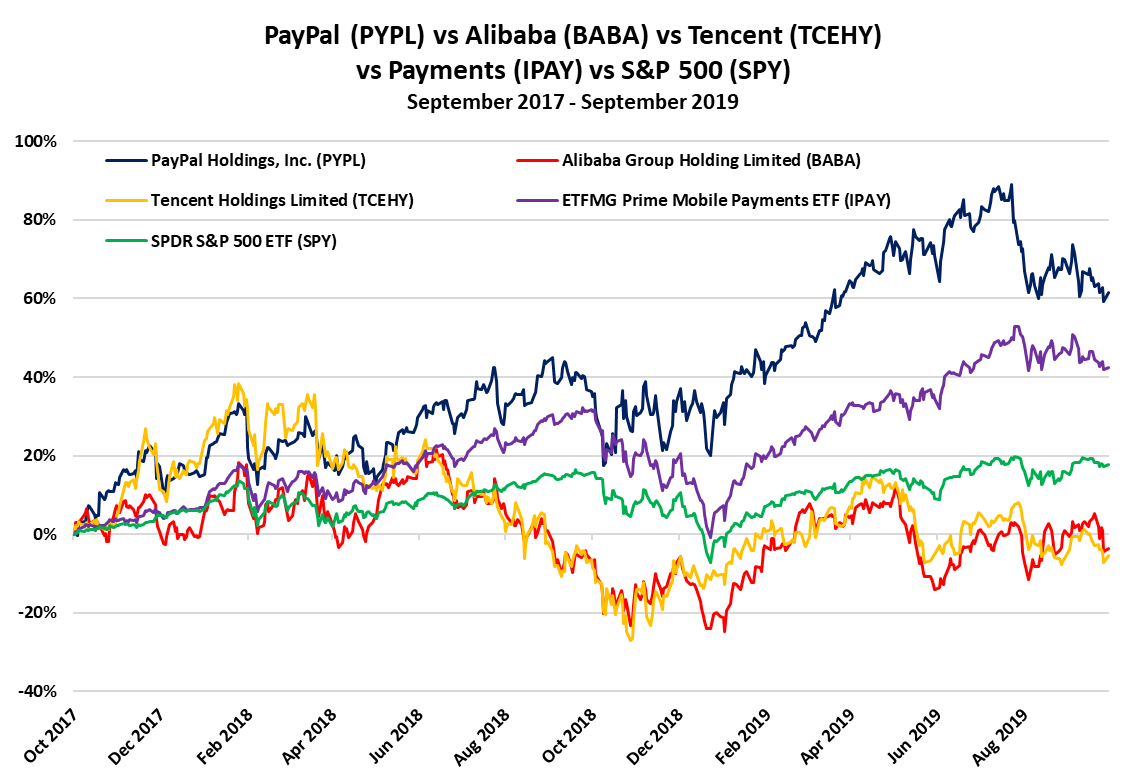 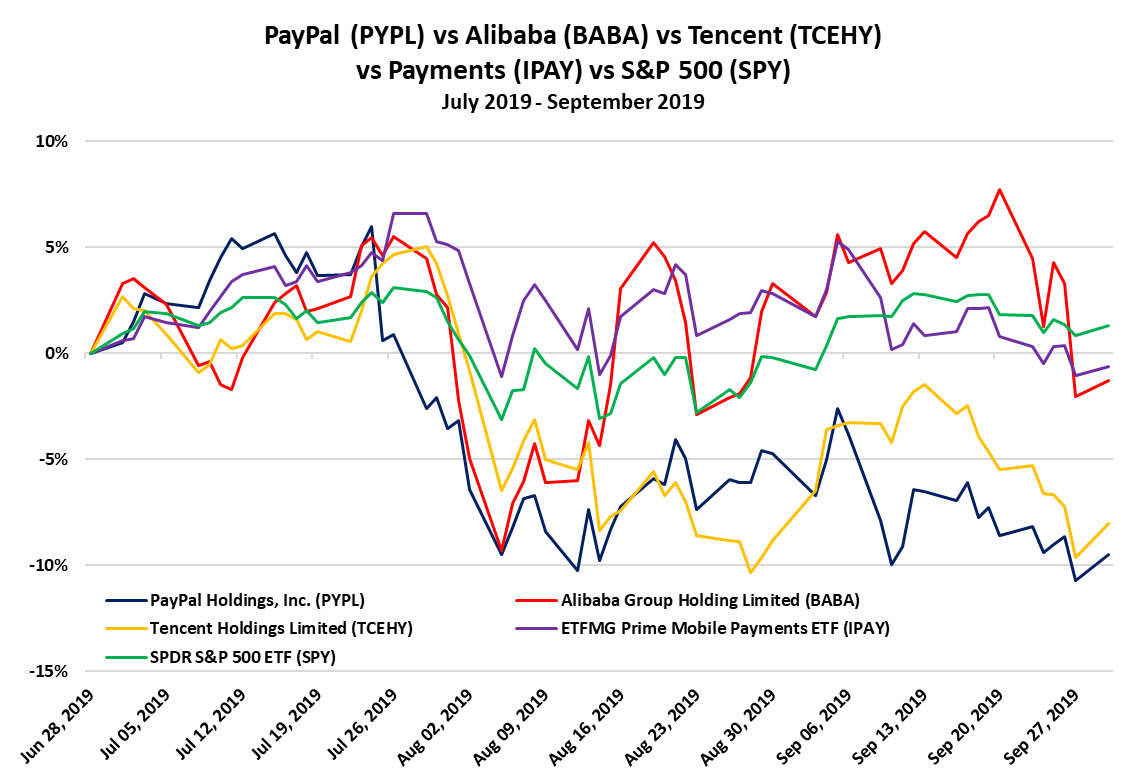 U.S. firms in the financial services market have for a long time struggled to enter China. Notably, American Express became the first U.S. card network to gain permission to set up card-clearing services in China last November, and Mastercard this year said it would try to set up a joint venture with another local player to gain entry.

PayPal said the transaction is expected to close in Q4 2019 and is subject to customary closing conditions.

Read the full article from TechCrunch +

Ant Financial demonstrated just how big Alipay really is, posting a 20 percent growth in the six months as of December 2018. Between Alipay proper and its various “local e-wallet partners,” a total of 1.2 billion users worldwide is now being reached. Since Alipay launched its globalization strategy back in 2016, the coalition saw an overall growth of 260 percent in just the last three years.

Ant Financial has been actively considering the future and has determined blockchain will be a major part of things. Thus, it’s been opening up its studies on blockchain to various potential and current partners, including banks, insurance companies, and even elements of the government to help find ways to improve efficiency and reduce costs with the still-new technology.

Ant Financial demonstrated just how big Alipay really is, posting a 20 percent growth in the six months as of December 2018.

Investors have rushed to buy into fintech firms this month despite no clarity on when Beijing will launch its digital currency. Yi Gang, the central bank governor, has said the PBOC does not have a timetable for rolling it out.

Read the full article from Reuters +

Google chases businesses to maintain its payments lead in India

Google said today it is bringing its mobile payments app — Google Pay — to businesses in India as the Android-maker rushes to maintain its payments lead in one of its key overseas markets before its global rival Facebook sets off a similar play in the nation.

“India has more than 60 million small and medium-sized businesses, however only a fraction of them support digital payments. Imagine the transformation that is possible if more of these merchants could access payments online,” said Ambarish Kenghe, director and product manager for Google Pay. The company is also bringing a feature that will enable users to discover entry-level and white-collar jobs through the Google Pay app.

The payments market in India — which is projected to be worth $1 trillion by 2023, according to Credit Suisse — is becoming aggressively crowded and competitive.

Google also announced that it is bringing tokenized cards for debit and credit cardholders in India, which will allow them to pay for things using a digital token instead of their actual card number.

In the meantime, Paytm is working to expand its reach in the nation, too. The company, which posted a yearly loss of over $500 million last year, said earlier this month it intends to invest another $3 billion into its business in the next two years.

Read the full article from TechCrunch +