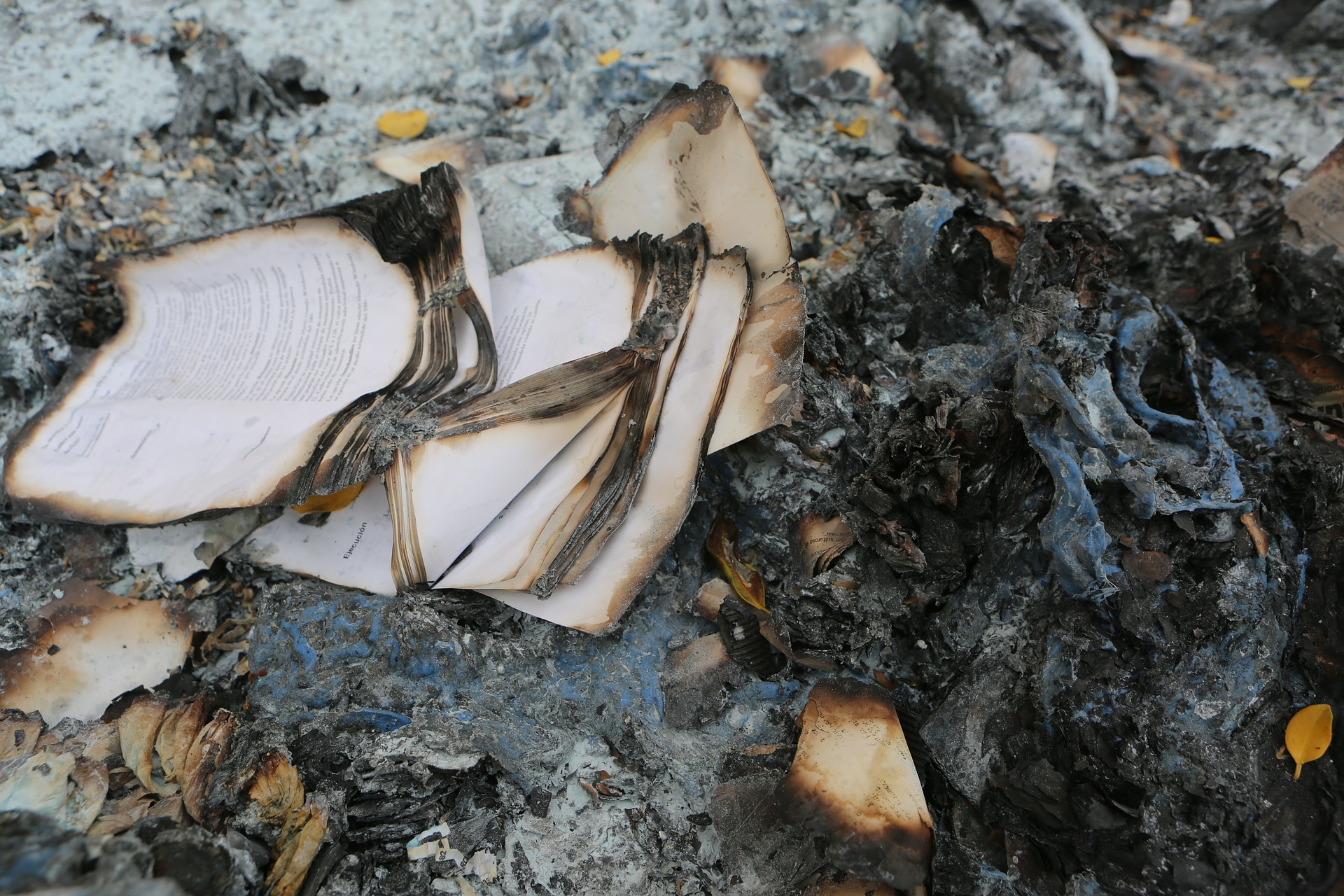 “Inflation is Much Too High”… Duh!

As inflation threatens to breach the 8% mark in coming months, Federal Reserve officials have drastically revamped their policy response to persistent price pressures. Fed Chairman Jerome Powell has stated this month that “inflation is much too high” and that the central bank’s expectations for 2022 have “already fallen apart”. Though monetary policymakers are finally getting serious about tackling inflation, they find themselves far behind the curve and will likely need to play catch-up in regard to tightening. However, a broader softening of economic data, which has spurred downgrades of several GDP forecasts, makes that a dangerous game and risks pushing the economy toward stagflation.

This time last year, FOMC projections pegged median inflation expectations at 2.2% in 2021, followed by a decline to 2.0% this year, and then a marginal increase to 2.1% in 2023. At that time, the core PCE, the Fed’s preferred inflation gauge, had already reached 2.0%, indicating that monetary policymakers believed inflationary pressures would begin to subside imminently.

While the Fed was entrenched in their thinking that an unprecedented wave of money printing would not result in a persistent wave of inflation, fears were being stirred among consumers and traders. As MRP wrote in our March 2021 Viewpoint, Preparing for Inflation Amid the Printer-Powered Recovery, we noted that web queries for “inflation”, consumer inflation expectations, and breakeven inflation rates were just beginning to spike.

We even suggested the US could see a return to the scorching inflation of the 1970s in coming months. According to some measures, that comparison looks very much warranted.

A year on from that Viewpoint and the Fed’s lowball projections, the latest print on the core PCE shows a YoY gain of 5.4% for February. Other key measures of inflation like the consumer price index (CPI) show even greater pressure on prices, rising at a pace of 7.9% YoY through February. That is the strongest print since 1982. 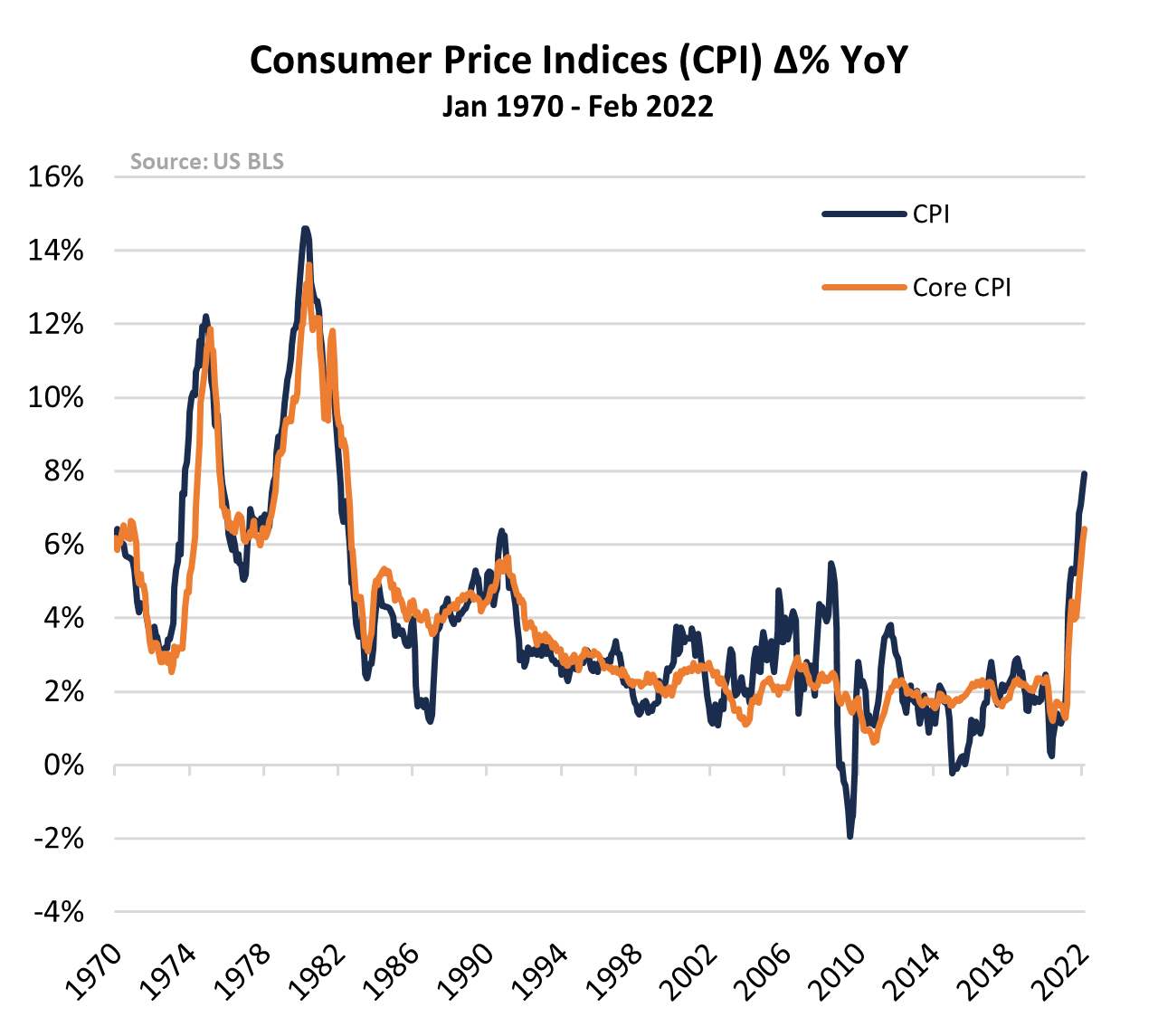 Even when inflation begun soaring past their 2.0% inflation target, the Fed stuck to its guns until it was glaringly obvious to virtually everyone else that the situation had spiraled out of control. It wasn’t until November that monetary policymakers admitted they’d also lost control of the narrative and abandoned the “transitory” talking point. After 25 months of asset purchases and aggressive balance sheet expansion, the Fed plans to conclude a tapering of that buying binge very soon. To their credit, the Federal Open Markets Committee (FOMC) did raise the benchmark federal funds rate by 25bps, the first hike since 2018, but one has to wonder if it is a classic case of “too little, too late”.

Marking a drastic shift in sentiment throughout the Fed, the latest dot plot shows a median expected policy rate among 16 FOMC participants of 1.9% by the end of the year, suggesting six additional 25bps rate hikes through the rest of 2022. Those expectations rise to around 2.75% by the end of 2023 (suggesting another 3 hikes next year), and then holding steady through 2024.

Still, inflation-adjusted “real” rates remain so deeply negative at today’s CPI inflation rate of almost 8.0% that it would take 30 hikes at a standard pace of 25bps to get them back to zero. We calculate real rates as the difference between the fed funds rate and the YoY change in an inflation gauge. If we substitute in the core PCE’s latest annual reading of 5.4%, it would still take 20 quarter-point hikes to get real rates out of negative territory. 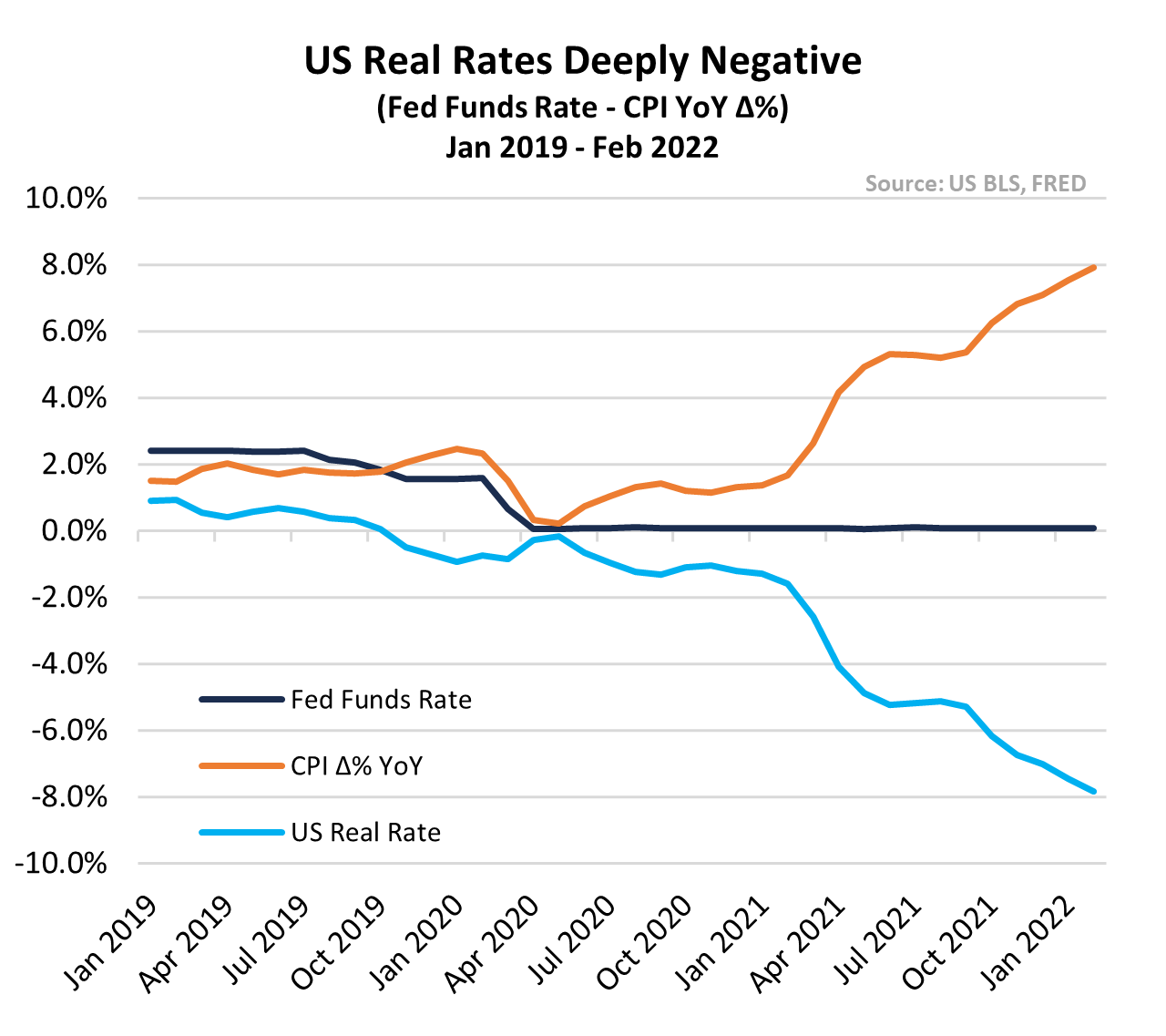 The Fed’s March meeting did mark a rise in inflation expectations at the central bank through this year and next, but not by much. Their median projections for annual increases in the core PCE index through 2022 and 2023 are now 4.3% and 2.7%, respectively. Regardless of how effective this rate hike regime is, it is possible… 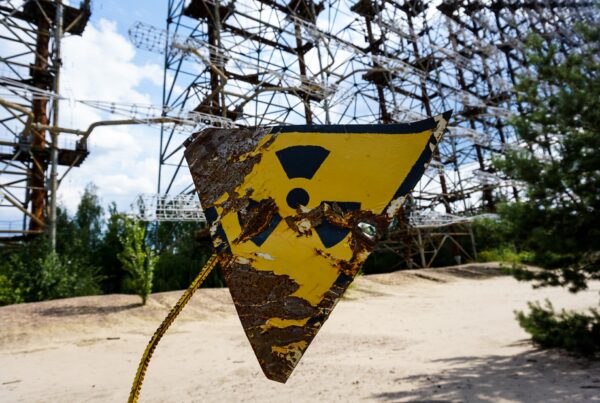