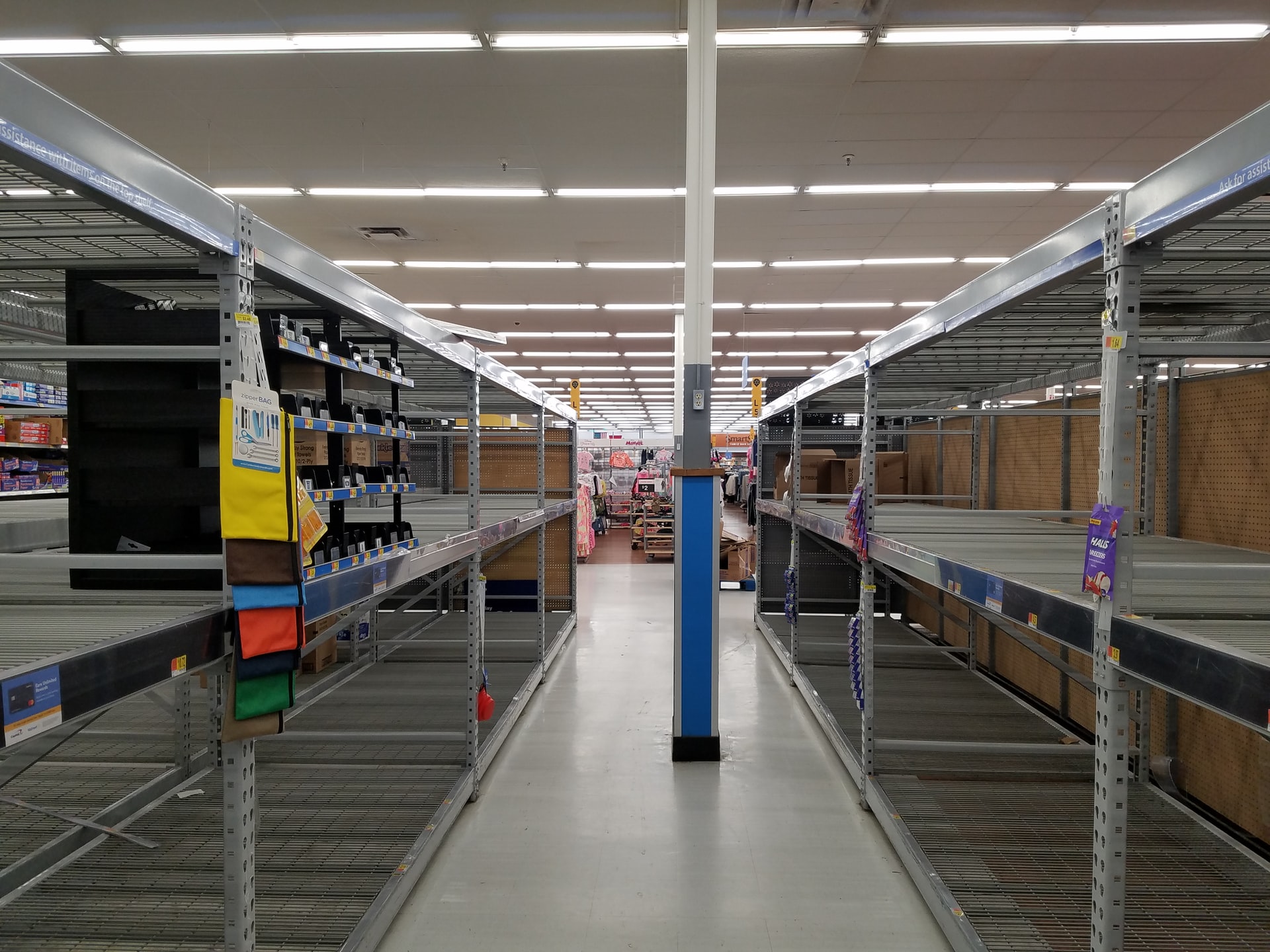 Looking Through the Third Wave

A third wave of COVID-19 slammed the US economy throughout the summer months, but new case numbers appear to have crested in September. Elevated inflation remains a major concern for investors as Fed Chair Powell’s latest comments suggest relentless price pressures will continue “into next year”. Meanwhile, uncertainty around the Government’s ability to pass new budget measures and avoid a collision with the US Treasury’s debt ceiling has also stifled sentiment in financial markets. Despite all of that, light at the end of the tunnel is becoming visible and rising bond yields show that a rebound in key economic data points may be on deck for Q4 and beyond.

Broadly speaking, the most positive macroeconomic factor to report this month is the rolling over of the “third wave” of COVID-19. The number of daily new cases around the globe peaked in August at just above 821,000. In recent days, new infections have dropped to as low as 331,000 – a 60% decline and the lowest daily total since June.

That trend can be observed in the US as well. According to Our World in Data, daily cases for September peaked around 277,000, meaning this latest wave of new cases never surpassed the previous high of 296,000 that we saw last January. 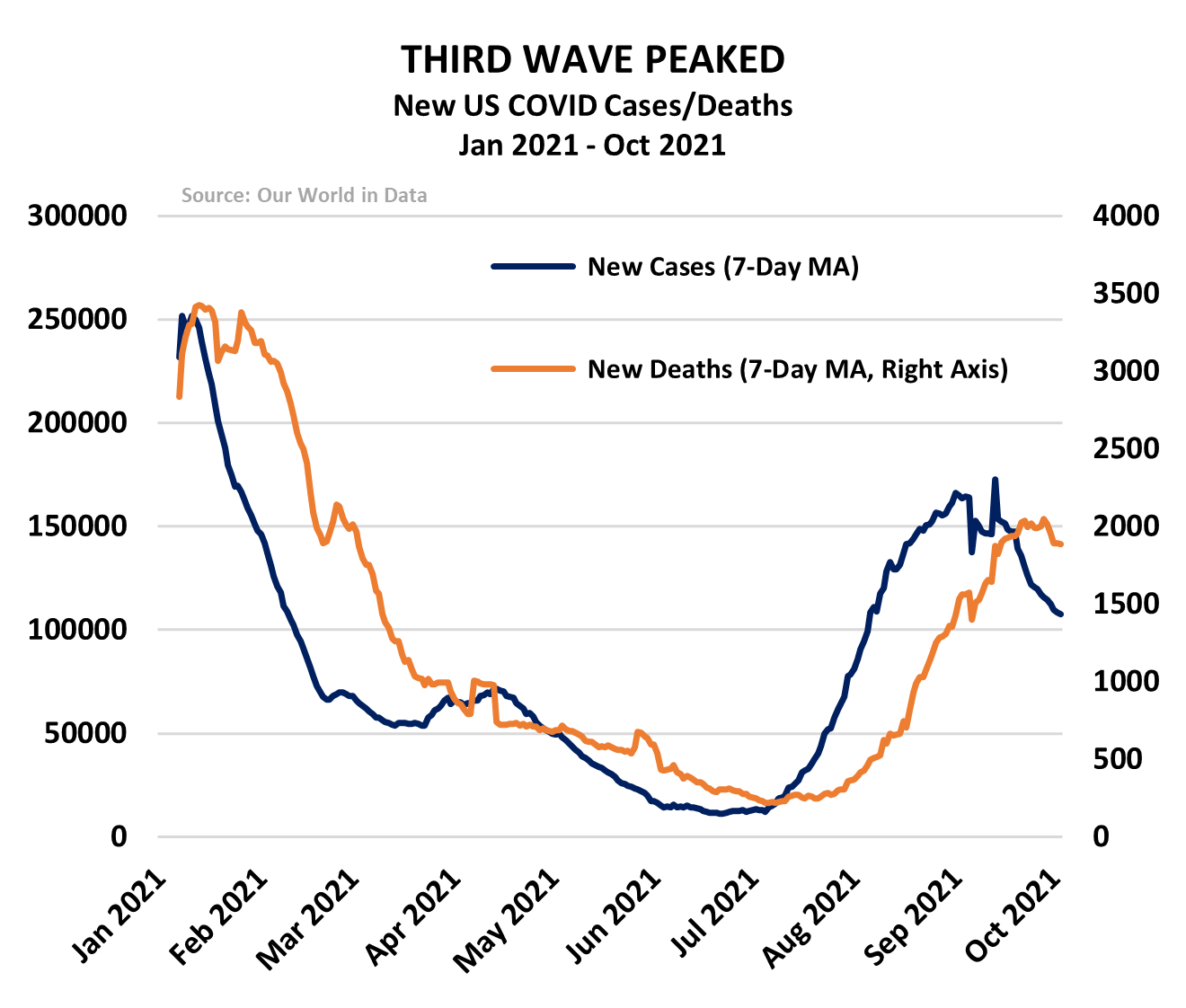 The downturn in new cases has been largely driven by the cooling down of hotspot states. Daily case data has shown a downturn of more than 80% in Florida, 75% in Texas, and 50% in California. Florida’s case numbers have seen a particularly steep decline, falling for 5 straight weeks from a peak of more than 27,000 new cases in a single day to less than 5,000 last Friday. More importantly, new deaths have fallen from an August peak of 400 to just 10 on October 1.

​Of course, a fourth wave could always be possible, along with subsequent waves after that, but more than 185 million Americans are now fully vaccinated, up from 175 million at the start of September. That makes it ever more likely that outbreaks will be more manageable going forward and the impact on the economy diminished. Some have raised concerns about the possibility of vaccine-resistant strains over the past few months – particularly the lambda and mu variants that have popped up in other parts of the world. While the former has largely disappeared from the headlines recently, the latter has been totally eradicated in the US, accounting for zero cases of COVID-19 in the week to September 20.

Data from the Centers for Disease Control (CDC) and Nextstrain show the Delta variant still accounted for 99% of new US COVID-19 cases in September and roughly 88% of cases globally. According to the Wall Street Journal, virologists expect Delta to continue outcompeting new variants of the SARS-CoV-2 virus.

Though future outbreaks may not be so impactful, a COVID-induced softening of key data points was still evident throughout August and into September.

The preliminary reading for the US IHS Markit Composite PMI – a combination of the purchasing managers’ indices for manufacturing and services – fell to 54.5 in September of 2021 from 55.4 in August, preliminary estimates showed. Any reading above 50 indicates activity continues to expand, but September’s print pointed to the lowest growth in private sector activity since September of last year. Meanwhile, the US Census Bureau’s measure of growth in construction spending flatlined at 0.0%, the slowest pace of growth since last February.

In the week ending September 25, weekly jobless claims rose for a third straight period to 362,000 – 15% higher than where that reading started the month. Nonfarm payrolls data, available later this week, is expected to show the US economy having added 460,000 jobs in September, but that is well below the more than 1 million jobs added in July. August payrolls data was one of the biggest disappointments in recent memory, adding only 235,000 jobs and missing a consensus expectation of 750,000. 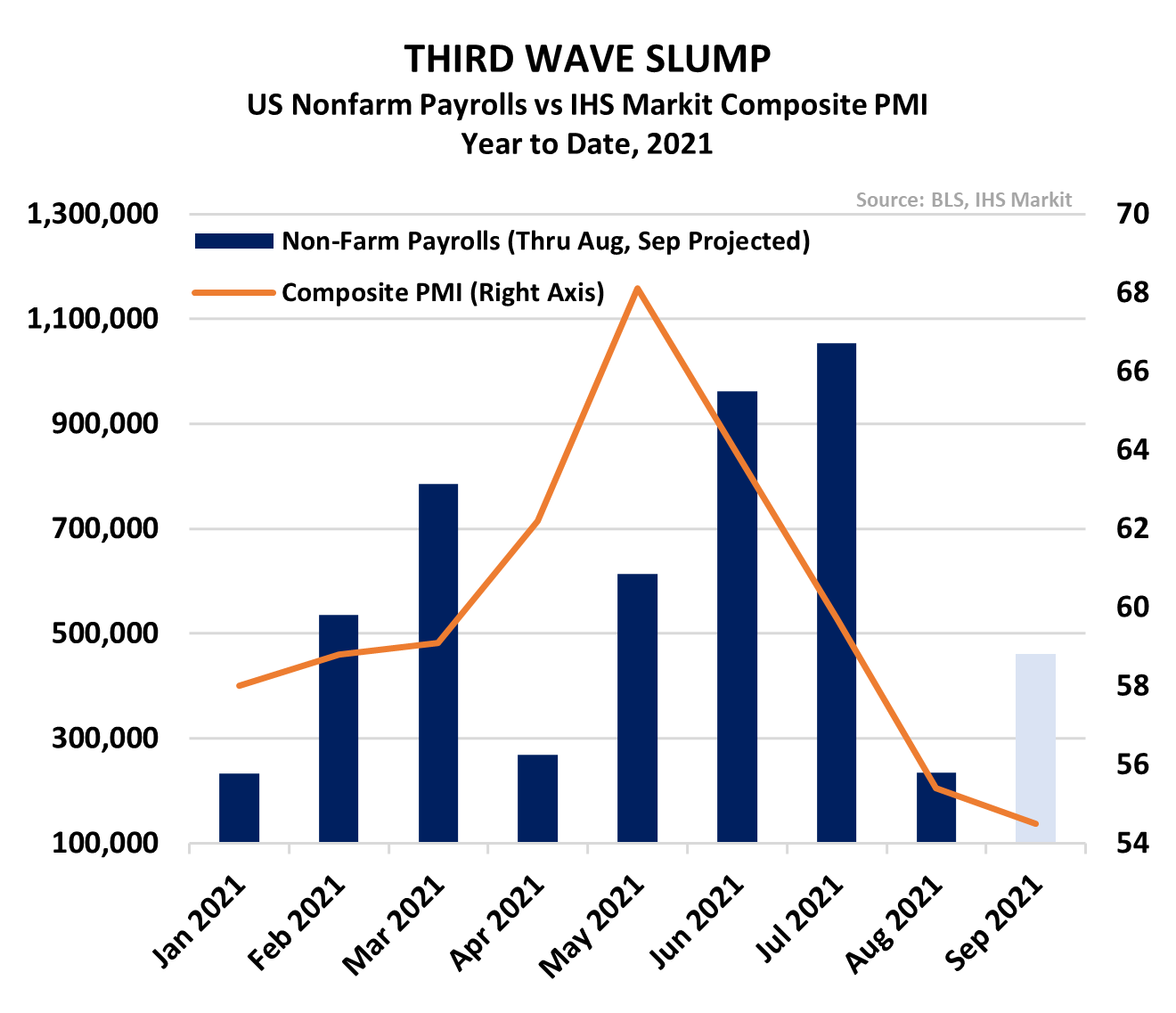 Expectations for the economy have also been clouded by a potential government shutdown and subsequent default by the US Treasury Department. President Biden signed a bill last Thursday extending government funding through early December, but that will not resolve the unfolding crisis in regard to the debt ceiling – the limit on bonds the Treasury can issue to continue normal operations.

Failure to meet their obligations would mark a first-ever US default. Treasury Secretary Janet Yellen has said the government will run out of cash around October 18 unless Congress raises the limit, currently capped at $28.4 trillion. If no resolution to raise the limit is reached, economic implications could become immediately palpable as nearly 50 million seniors could stop receiving Social Security payments. Some have reported that current payments could be prioritized, but new claims would almost certainly be halted.

The House of Representatives did advance a bill that would extend the debt ceiling into 2022 last week, but opposition in the Senate will almost certainly doom the measure. This gridlock has pushed some, including Secretary Yellen herself, to advocate for the full abolition of the debt ceiling – or at least taking the discretion to raise it out of congress’ hands. An evaporation of the debt ceiling would be the latest catalyst in an ongoing experiment in modern monetary policy (MMT). Of course, politicians and policymakers within the Fed and Treasury aren’t explicitly calling it that, but MRP noted over a year ago the outright suspension of any concern for fiscal responsibility.

As we wrote in Money Matters: Inflation, MMT, and Other Stimulus Spin-Offs, MMT posits that taxation only serves as a means of collateral and a way to take money out of the economy. With no debt limit, the Treasury is no longer constrained with the amount of tax revenue the federal government collects. With a virtually unlimited access to debt, tax income becomes increasingly irrelevant for funding government operations.

A $3.5 trillion budget reconciliation – a bill that would bundle in a raising of the debt ceiling if Senate Republicans continue to stonewall it independently – is also making its way through congress. Unlike most other bills, budget measures can pass the US Senate with a simple majority of just 51 votes, as opposed to the traditional 60, to become law. That presents an alternate route for Democrats to pass infrastructure-focused reforms that lack Republican support.

As MRP has noted in previous updates on US infrastructure initiatives, the chamber is currently split 50-48 among Republicans and Democrats, respectively, plus two Independents (Vermont’s Bernie Sanders and Maine’s Angus King) who both caucus with the Democrats. In a vote that split solidly along party lines at 50-50, Vice President Kamala Harris would undoubtedly exercise her role as the President of the Senate to tip the balance toward the will of the Democratic party. The only problem is that two moderate Democratic Senators, Joe Manchin (D-WV) and Kyrsten Sinema (D-AZ), have thus far refused to support a budget they see as too expensive.

While Biden has suggested Democrats may be willing to scale budget negotiations down to the $2.3 trillion range, that threatens to isolate more progressive elements of the Democratic party who already see the current price tag as a compromise as the original proposal contained $6 trillion in spending. The Senate could find itself in just as much gridlock as it is in now if proponents of a larger spending package begin defecting from the ranks.

Time is running out for the White House and Congressional Democrats to secure the votes they need, as the reconciliation process takes roughly two weeks to complete from the date of initiation. With the debt limit set to be reached just 14 days from today, the probability of a US default is higher than ever before. As a result of ongoing doubts about how long it will take to pass a budget, Congress has also delayed a vote on a $1.5 trillion infrastructure bill until the end of the month.

The prospect of a federal default, a delay or downsizing of key economic proposals, and weakening macro data have lowered growth estimates across the board.

As part of Bloomberg’s September survey of economists, forecasters lowered their median economic growth projections for the third quarter to 5% from 6.8% and trimmed their fourth-quarter estimate to 5.3%.

Goldman Sachs cut its estimates for US GDP growth to a 5.7% annualized rate in 2021, versus their previous 6% forecast. A big part of that…