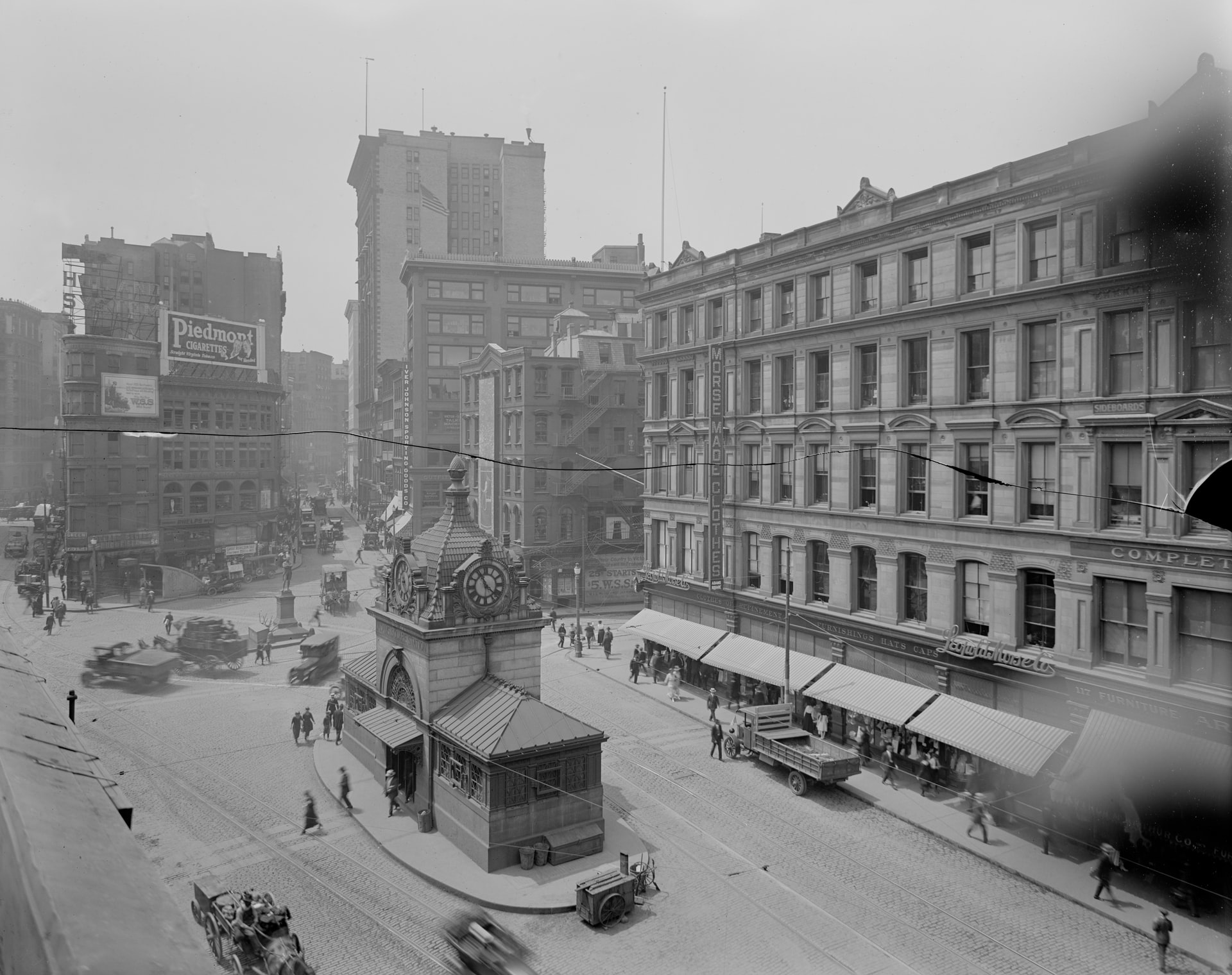 Despite growth in the Fed’s preferred gauge of inflation exceeding 3.0% for six consecutive months, a rise unlikely to peak before year end, monetary policymakers have been content to brush off rapidly rising inflation as “transitory” for some time. Survey data shows that characterization is becoming less common among traders and consumers alike these days. One can observe the most recent spike in breakeven rates of inflation to see what kind of price pressures the bond market is now pricing in over the next decade. Further, top executives across the financial services industry are speaking out about their expectations for persistently elevated inflation – as well as the new role digital assets might play in countering an extended debasement of purchasing power.

Throughout the past year, MRP has expressed disagreement with Federal Reserve policymakers’ “transitory” assessment of inflation pressures. Unfortunately, Fed Chairman Jerome Powell’s bully pulpit has been one of the most influential market forces; a phenomenon we’ve referred to as “Jay’s Jedi Mind Trick”.

According to Bank of America’s July Global Fund Manager survey, just 22% of 239 surveyed fund managers expected inflation to rise in the next 12 months while 70% expected inflationary pressures to be transitory rather than entrenched, in line with the view of the Federal Reserve. Only 3 months later, October’s iteration of that survey showed a slimming majority of 58% think the rise in inflation is transitory. Moreover, 48% ranked inflation as the top “tail risk” – more than double the next biggest threat, China’s economic troubles, at 23%. 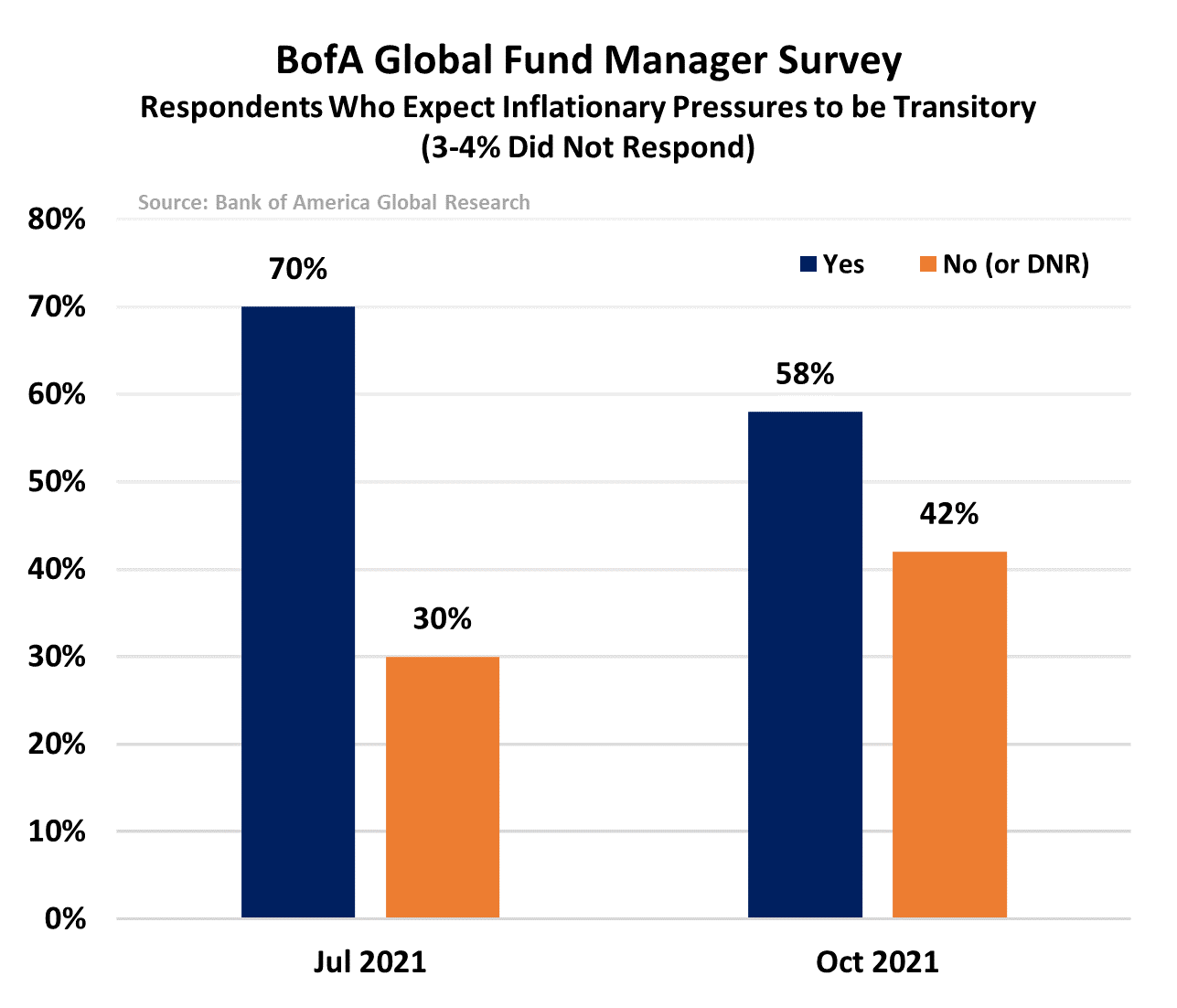 For the most part, market participants continue to buy into to the idea that, once temporary factors like stimulus checks and supply chain disruptions dissipated, inflation would fall back toward the Fed’s 2% target. Powell isn’t the only Fed policymaker who has displayed a largely dismissive attitude toward boiling price pressures.

Back in March, FOMC projection materials showed the median expectation among policymakers for growth in the core personal consumption expenditures index (core PCE, the Fed’s preferred gauge of inflation) at 2.2% for 2021 – just slightly above the central bank’s target rate of 2.0%. By the time April rolled around, the Core PCE had surpassed 3.0% and has only continued to rise since then. September’s Core PCE print was north of 3.6%, the highest reading since 1991 and the sixth consecutive month that the gauge surpassed 3.0%.

Despite being way off target all throughout all of 2021, the median projection among FOMC voters continues to show their preferred inflation measure will be at just 2.3% throughout 2022. However, if month over month (MoM) prints were as low as 0.2% through the first half of 2022, the annual gain in the core PCE would remain at or above 3.8% for the duration 2021. In fact, we’d see no peak in core PCE prints until February of next year. Through June 2022, the annual gains would stay above 2.7%. 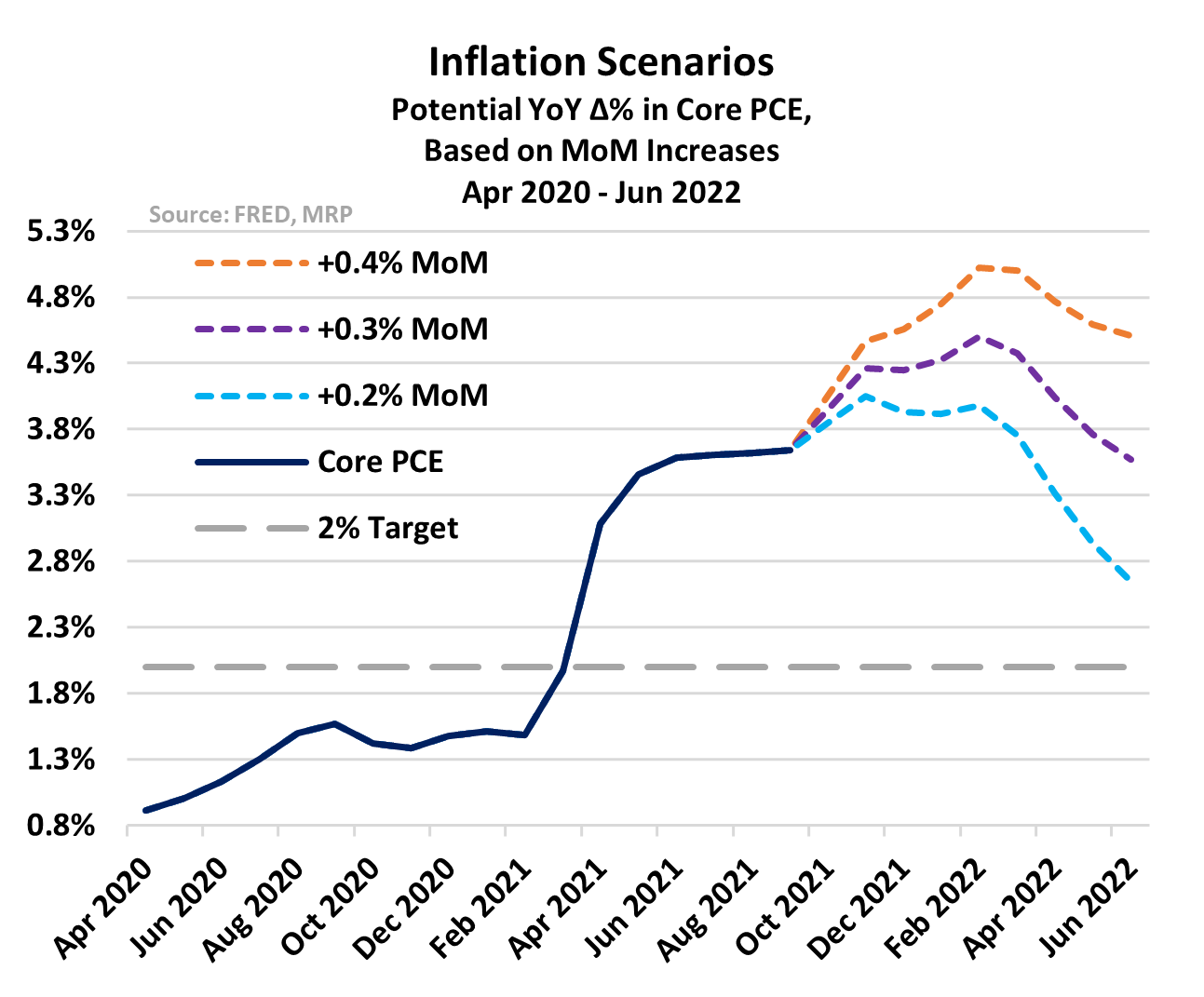 The problem with the assumption that inflation will peak early next year is that it doesn’t price in more massive spending plans currently brewing in Washington DC.

Though the cost of the White House’s budget reconciliation plan has been whittled down from an original price tag of $3.5 trillion to about $1.7 trillion over the next decade, it is only the latest splurge in a line of huge fiscal expenditures that have played a huge role in expanding the assets on the Fed’s balance sheet to more than $8.5 trillion. That total has more than doubled from $4.2 trillion at the start of 2020.

Simultaneously, the monetary base (the sum of currency in circulation and reserve balances) has also grown by 86% over that same period. Following the passage of the budget reconciliation deal, a $1.2 trillion infrastructure bill will likely be next on deck. 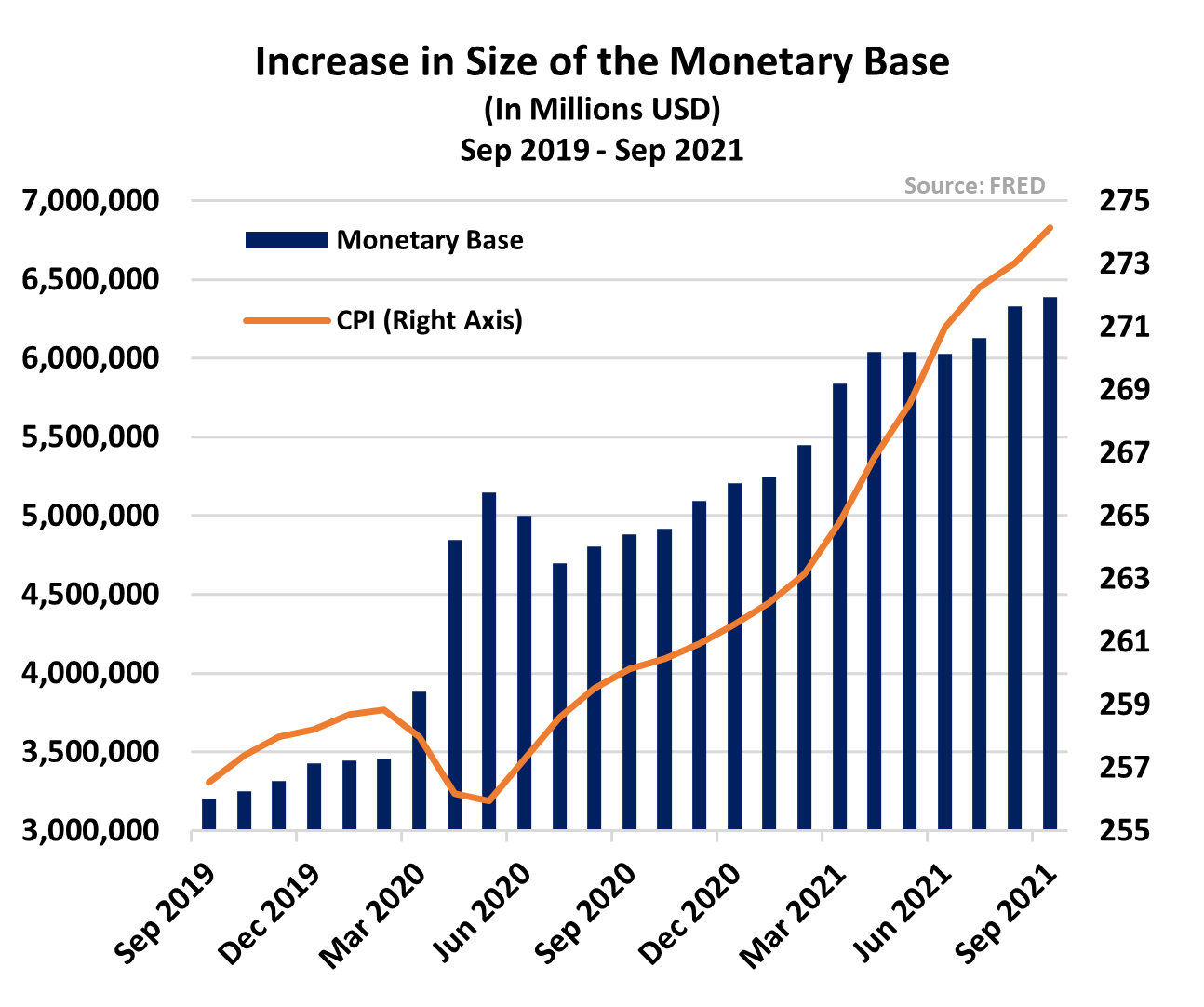 The Fed continues to purchase $80 billion worth of treasuries every month, along with $40 billion of mortgage-backed securities (MBS). Though policymakers have signaled they will begin to taper those purchases at some point before the end of the year, it will be a gradual process. Powell announced the Fed will begin cutting purchases at a pace of $15 billion per month in November ($10 billion worth of Treasuries and $5 billion of MBS). According to that pace, we’ll still be witnessing some level of asset purchases until the middle of next summer.

As we have written before, our view is that inflation is ultimately a monetary phenomenon. The various forces, such as supply chain disruptions, post-COVID re-openings, and rising home prices can make the consumer price index calculation go up and down and drive changes in the monthly numbers, but a sustained rise in the overall number typically results from too much money chasing too few goods.

“Hyperinflation is Going to Change Everything…”

While the Fed and other public policymakers continue to downplay inflation, the consensus among private sector actors has gradually started to come around to a different view – one that prepares to counter the threat of rapidly fluctuating price pressures in the years ahead.

Jack Dorsey, co-founder of Twitter and fintech giant Square, made headlines in late October for tweeting that “Hyperinflation is going to change everything. It’s happening”. Though the tweet garnered nearly 78,000 likes, replies from mainstream economists and other financial pundits came out of the woodwork to point out that the term hyperinflation is reserved for inflation rates surpassing 50% for at least a month – a very high bar with few documented instances in recorded history. In the most literal sense, “hyperinflation” is not happening now and is unlikely to happen in the near future.

Of course, that kind of ridicule is the easy way out. What’s harder to address is the implication of what Dorsey is really saying. Inflation has already risen far beyond what was previously expected and with the current pace of monetary expansion and economic displacement it’s probably not going away. We agree, even if an inflation rate in the mid-single digits, or the 10-15% range we saw back in the 1970s-1980s, isn’t technically hyperinflation, the US appears to be headed toward a new economic paradigm that may require new solutions to address it.

Cathie Wood, founder and CEO of Ark Invest, was one of the Jack’s most prominent critics. She went so far as to assert, not only will inflation fade after the holiday season, but a wave of technology-driven deflation could follow, a decrease in prices that the US economy has not dealt with since 2015.

Perhaps the most relevant piece of information is not necessarily where Dorsey and Wood disagree, but the common ground they share. For some time, Dorsey has largely framed his concerns regarding inflation through the lens of Bitcoin (BTC) – a digital asset that some believe is an inflation hedge due to its hard-capped supply. While Wood and Dorsey disagree on his use of the H-word in regard to the US, she has noted in the past “there are a lot of emerging markets that are suffering from significant inflation – in other words, the purchasing power of those populations is going down. So they are going to migrate to Bitcoin and other ways to preserve purchasing power”.

Both Wood and Dorsey are believers in BTC as a store of value, akin to a “digital” gold, and they are not the only ones.

Paul Tudor-Jones, founder of Tudor Investment Corporation, has recently referred to the ongoing wave of inflation…