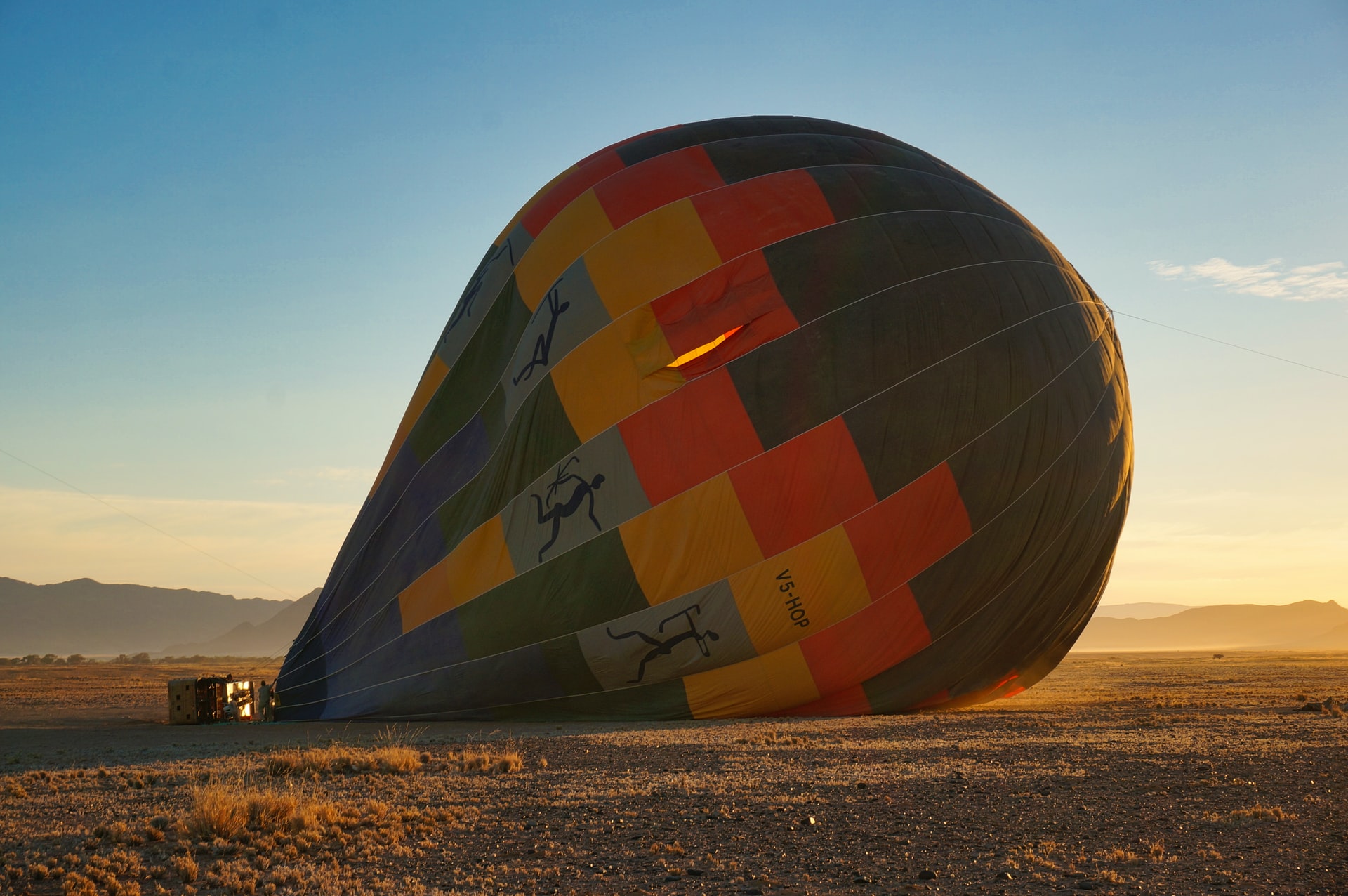 In Q1, the US economy contracted for the first time in almost two years. Simultaneously, the yield curve has sent a foreboding signal with the spread between two-year and ten-year yields inverting. Recession forecasts will undoubtedly be on the rise in the months ahead as the Fed continues to ramp up its hawkish approach toward interest rates and balance sheet reduction. One data point that still appears to be on the rise is inflation. Just as the Fed has finally managed to fully taper their asset purchase program and begin stemming the flow of ultra-cheap money, it appears that a period of stagflation is likely to set in, compounded by a rapid rise in longer-term rates and significant volatility in equities. MRP has been highlighting the possibility of an oncoming wave of stagflation for over a year now and, going forward, we expect inflation to remain elevated and growth to remain subdued.

The outlook for the economy and the capital markets is about as murky as it’s ever been. The war in the eastern Europe, the global surge in inflation, and faltering confidence almost everywhere suggest an economic decline sometime soon. Still, there remains other data indicating continued expansion at a modest or subpar rate, albeit with very little easing of inflation pressures. Bottom line: below average growth and persistent high inflation.

In the most common terms, that mix is typically referred to as “stagflation”. MRP first highlighted the possibility of an oncoming stagflationary environment in our February 2021 viewpoint, Stagflation Nation, which noted that there was ”good reason to believe that a period of higher growth and subdued inflation may be short-lived.”

The latest readings on prices and GDP appear to be even more evidence that this assessment was correct.

March’s consumer price index (CPI) reading touched a more than 40-year high at 8.5%, continuing a string of prints that have shown no sign of slowing. Given the fact that the producer price index (PPI) rose another 1.4% in March, driving a new record high 11.2% increase YoY, it is likely that price pressures could continue to intensify in the months ahead. 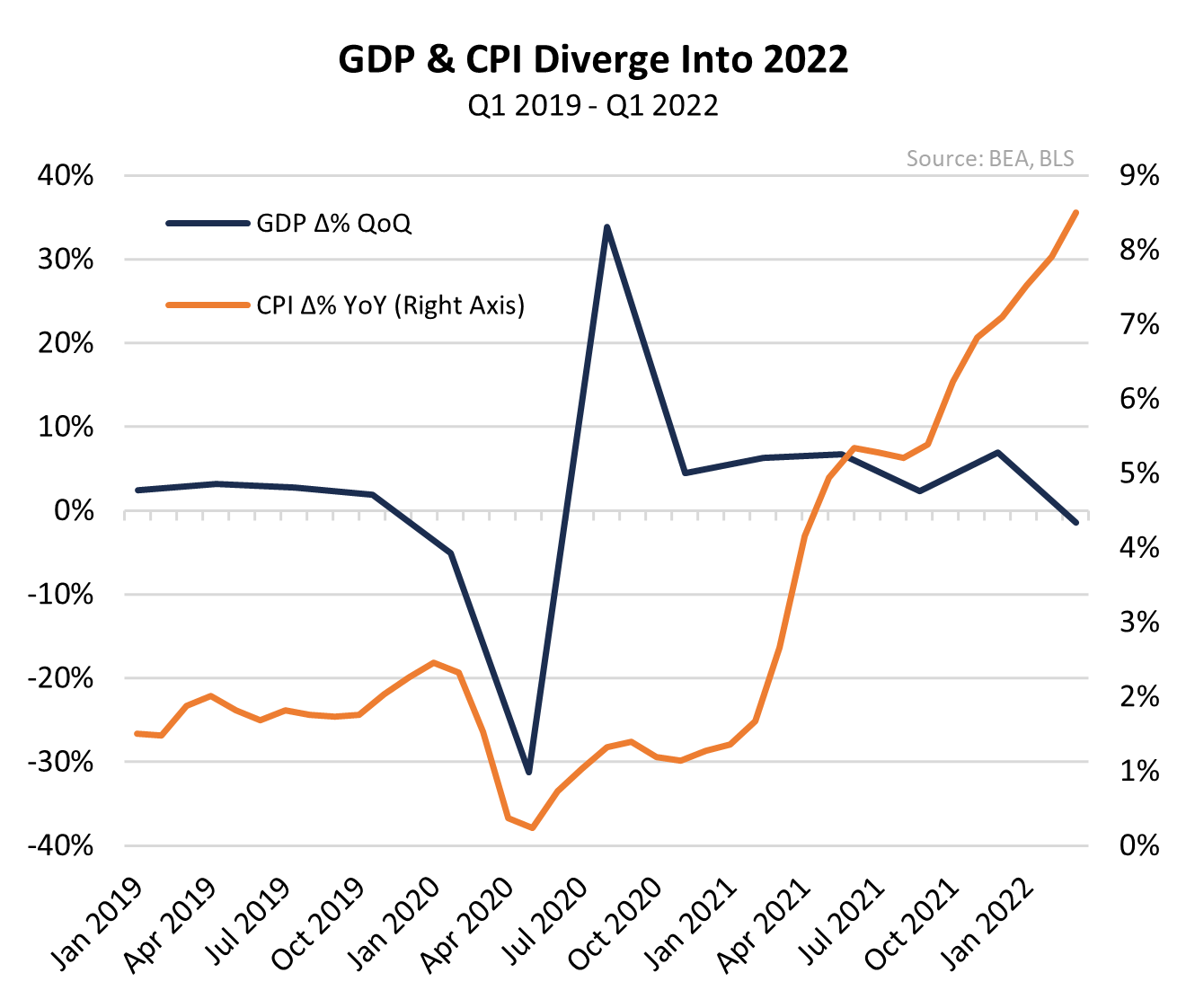 While rising inflation was expected, the contraction of the US economy in Q1 was not. MRP has highlighted several downgrades to GDP expectations for the first quarter, as well as a broad softening of macro data, but declining growth of -1.4% was far beyond what many expected. The median projection in a Bloomberg survey of economists called for a 1.0% increase. The Atlanta Fed’s GDPNow Model was less optimistic, giving a final forecast of 0.4% growth.

Though this latest data could pull recession predictions even further forward, the thought of an economic downturn was already at the forefront of many Americans’ minds. Per the most recent CNBC + Acorns Invest in You survey, conducted by Momentive, 81% of 4,000 adults said they believe the US economy is likely to experience a recession in 2022. It would be hard to blame anyone feeling pessimistic about the state of the economy as most respondents (52%) also said they’re under more financial stress now than a year ago.

Recession Predictions on the Rise

Consumers are not alone, as several major investment banks have been ratcheting up the pessimism.

Even prior to the news of the first quarter’s contraction, Goldman Sachs estimated the likelihood of a recession within the next two years at about 35%. Bloomberg Economics’ recession-probability model, meanwhile, had estimated a 44% chance of recession happening before January 2024.

Among the most aggressive forecasters is Deutsche Bank’s, which has openly written in a recent report that “We will get a major recession”. On the expectation that the fed funds rate will be pushed well into the 5% to 6% range by the Fed’s aggressive stance on policy tightening, David Folkerts-Landau, group chief economist and head of research, notes that the economy will fall “into a significant recession by late next year”.

Perhaps the most ominous signal of an oncoming recession, however, has been the recent inversion of the yield curve. This “inversion” occurs when the yield on the 10-year US Treasury bond yield dips below the yield on a 2-year Treasury bond. Essentially, this is the point at which short-term rates exceed long-term rates, indicating investors see the near-term riskier than the long-term. A yield curve inversion has been hailed as quite a reliable recession predictor, correctly predicting seven of the past eight recessions, according to a recent study by BCA Research. Usually, recessions have occurred anywhere from 6 to 24 months following the inversion.

However, the single miss by the 10-year-2-year gauge was negated when researchers instead used the gap between 3-month and 10-year yields as the measure of inversion, calling all eight recessions without a false signal. By that measure, the yield curve has remained far from inverted, with the spread recently touching a 5-year high above 210 bps. Federal Reserve Chairman Jerome Powell himself has said he prefers the 10-year-3-month gauge over the 10-year-2-year, as does a 2018 note from the Fed, which could play a factor in the way the central bank approaches their ongoing tightening of monetary policy. 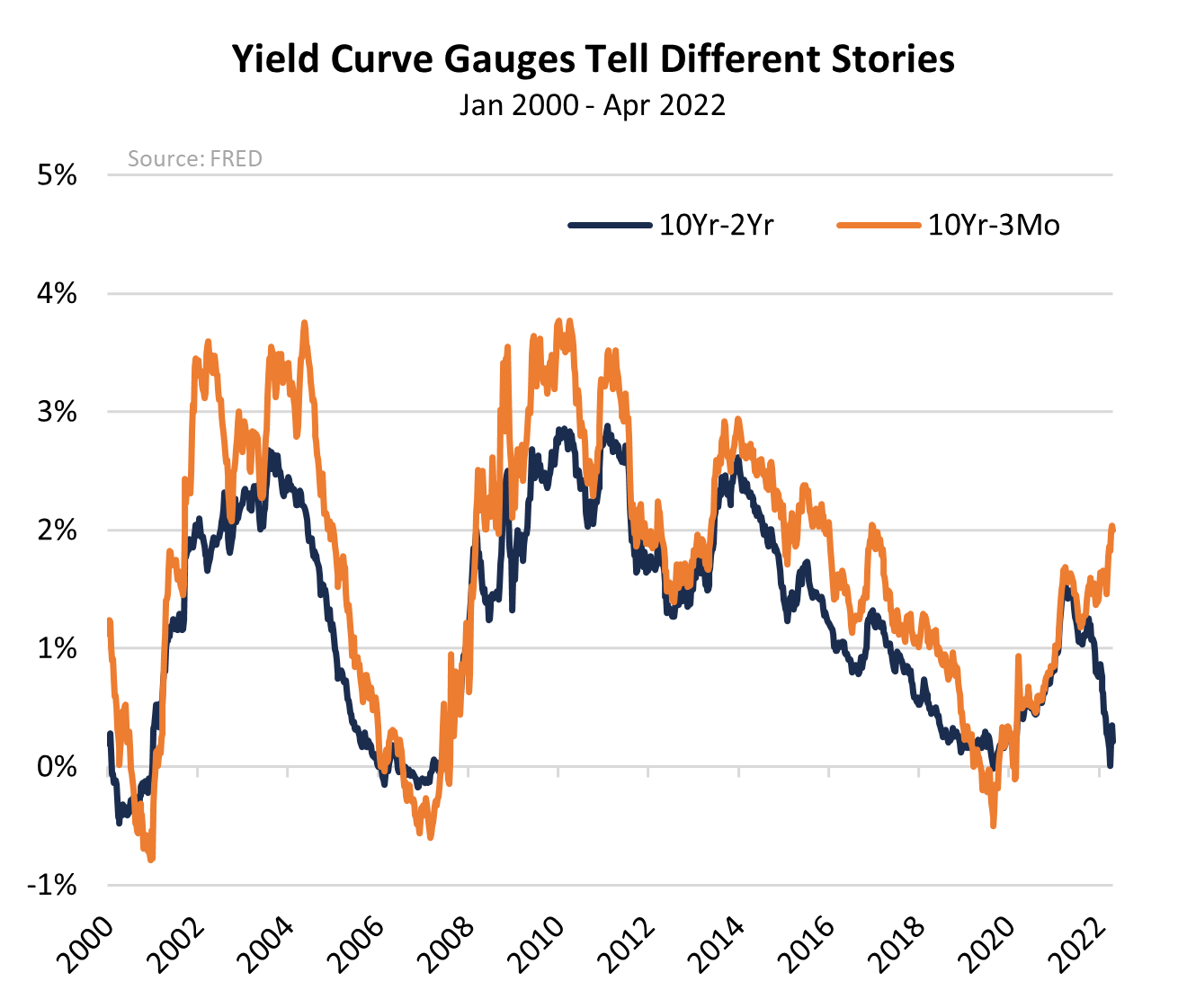 Despite the weaker growth, MRP still sees significant potential for inflation to continue gathering momentum and remain elevated for some time. This morning’s print on the Fed’s preferred inflation gauge, the core producer consumption expenditures (PCE) showed a rise of 5.2% YoY in March; is 160% higher than the Fed’s target rate of 2.0%.

Interestingly that was slightly lower than February’s reading of 5.4%. Some have speculated that this could mark the peak in rising inflation, but…