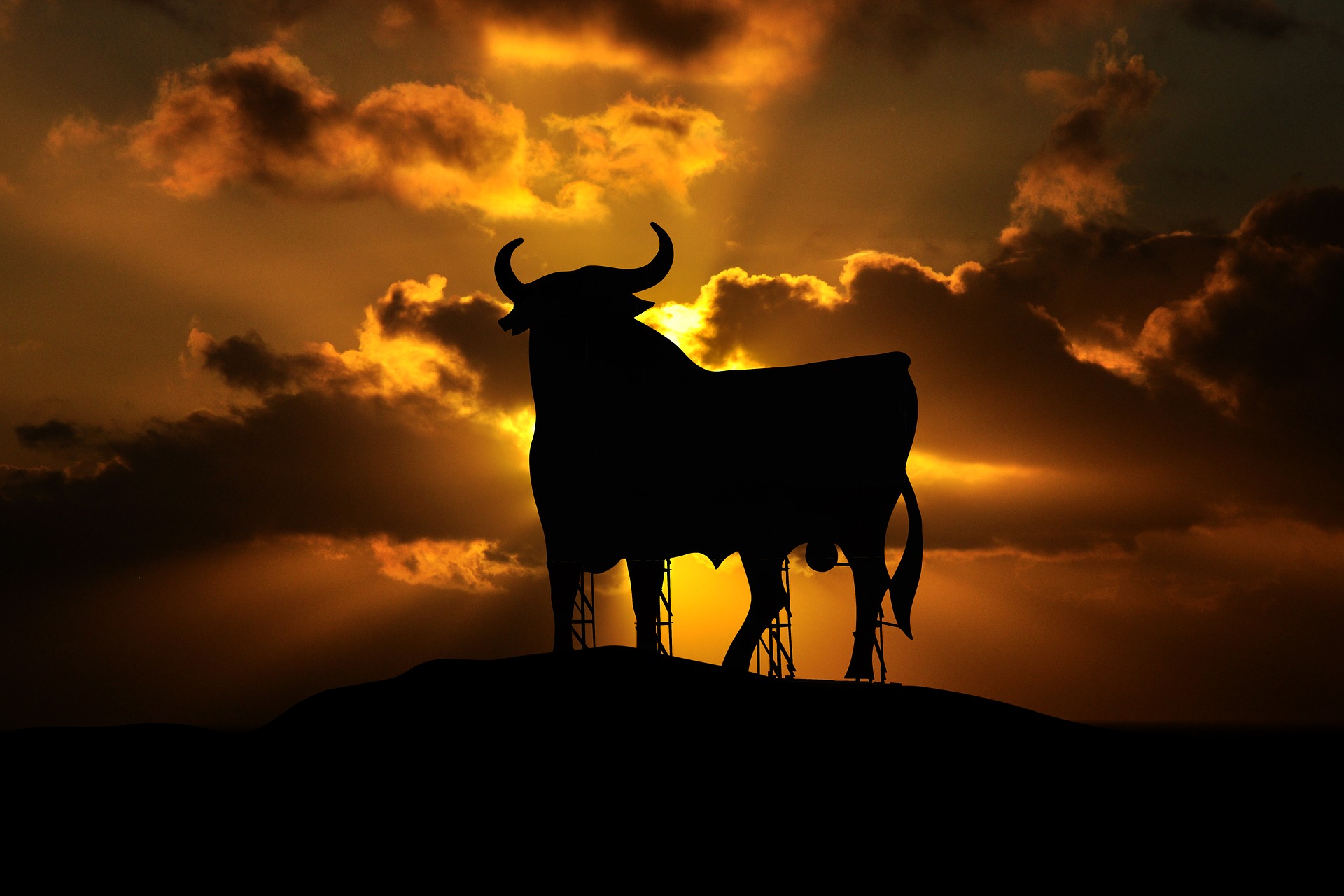 Eulogy for a Bull Market

Stocks dipped into bear territory in May, largely driven by the Fed’s continued commitment to tighter monetary policy. While lower share prices have helped to compress P/Es throughout the past few months, breakout earnings growth has had a greater impact on multiples over the last year and a half. By that measure, equity valuations appear to be much less extended today, but any significant rally in stocks would likely initiate expansion of multiples yet again, given an expected dearth of earnings growth ahead. As inflation continues to run hot, demand destruction is also becoming a concern.

In our December 2021 Viewpoint, Bye Bye, Transitory, MRP noted that the bull market had entered its “eighth inning”, with a peak in the S&P 500 right on the cusp. Following a 20% decline from the S&P 500’s January all-time in, achieved earlier this month, the timing of that statement ended up being quite accurate.

It wasn’t exactly a profound revelation that the bull market could be coming to an end soon by that point, however. The Fed had already begun signaling the end of ultra-easy monetary policy and history has proven many times over that an initiation of tighter policy at the Fed typically coincides with a decline in equity valuations. With the market as extended at has ever been and rates expected to climb at an unrelenting pace throughout the rest of the year, a descent into bear market territory is a reasonable outcome.

It was all of the signs that led up the Fed’s resolution to tighten that were the keys to understanding how the wheels ultimately came off. That starts with inflation, a theme that has dominated market commentary (including MRP’s) for well over a year now. Our contention when it comes to inflation has always been relatively simple and can be summed up in a quote by Nobel laureate Milton Friedman: “Inflation is always and everywhere a monetary phenomenon, in the sense that it is and can be produced only by a more rapid increase in the quantity of money than in output.”

With that in mind, the nearly $5 trillion expansion of the Fed’s balance sheet created a “when, not if” scenario for massive inflationary pressure that would have vast consequences for equities markets as well.

In September 2021, as part of our Viewpoint Inflation & Valuation, we examined the long-term relationship of each of those variables. Elevated price to earnings ratios (P/Es) have usually been associated with abnormally low inflation and interest rates. By utilizing a time series of the S&P 500’s trailing 12-month P/E ratio, compared to YoY changes in the Consumer Price Index (CPI), it becomes immediately apparent that that these two variables are inversely correlated over the long term. 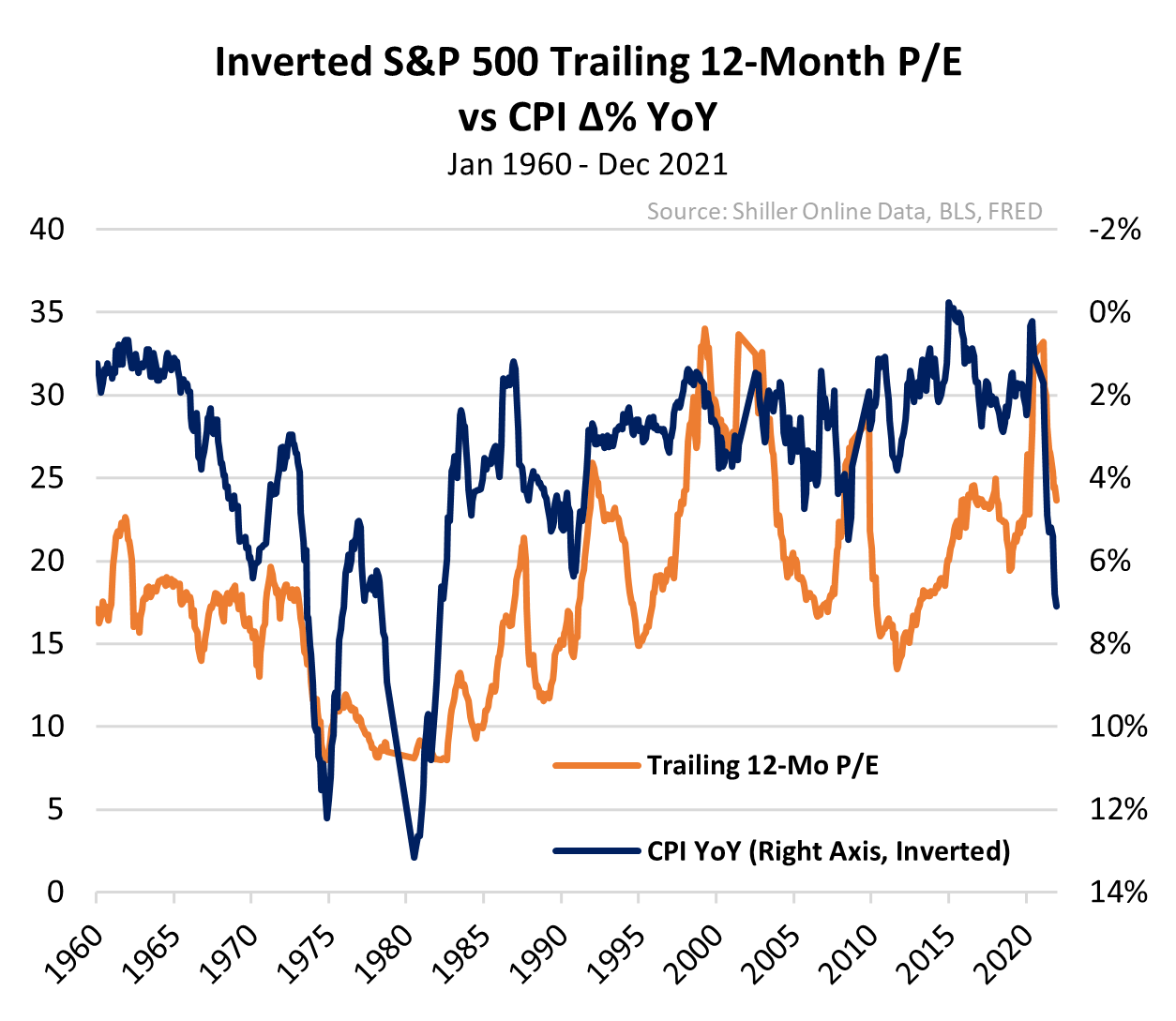 P/E Ratios Feeling Pressure on Both Sides of the Equation

It wasn’t until recently that we have seen this relationship warped by breakout levels of inflation, spurred on by massive fiscal and monetary stimulus regimes. However, with stocks down and inflation buoyant, it appears we are headed back toward the longer-term inverse relationship.

At that time, we wrote that the majority of market participants “continue to believe surging inflation over the past several months remains a transitory phenomenon. At MRP, we do not see it that way. In fact, we fear that the next couple of years could bring on a huge downward revision to P/Es; one that will pull them back toward historically normal levels.” On each of those points, our assessment was correct due to a couple of critical factors.

First, and most obvious, is the aforementioned tightening by monetary policymakers at the Federal Reserve. While the Fed was projecting low to moderate inflation and rates near zero through 2023, MRP’s assertion was that this level of dovishness was unsustainable and, once the true scope of a coming inflationary surge became obvious, the Fed would be forced to “blink” and reverse course on their previous remarks.

As we noted in our May 2021 Viewpoint, When Jay Blinks, we had become “more and more convinced that late this year [Fed Chairman Jerome Powell] will indeed blink and be unable to continue arguing that the inflation upsurge is transitory and will go away on its own; setting the stage for interest rate hikes sooner than previously expected by investors.” It would take until late November for Chairman Powell to officially retire the term “transitory” to describe out of control price pressures, coinciding with a sudden shift in policymakers’ expectations for rates and inflation in the year ahead. This has unsurprisingly been the primary driver of lower equity prices throughout the last few months. 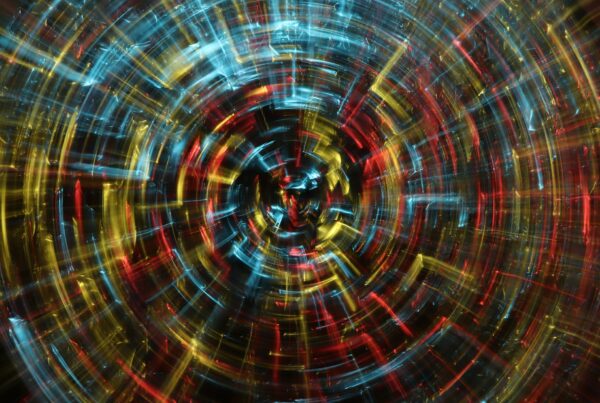 Cyberthreats Resistant to Economic Headwinds, Cybersecurity Spending Will Have to Keep Up